I’m in the process of trying to dig up decent video and audio footage of readings and performances, new and old.  If you should have any, would you be so kind as to let me know?  Thanks!

with
Keith Cary on cello
Heath Proskin on bass

A new(ish) version, and much better than the one I’d had up here before.

I read a selection from “nameless, unreasoning, unjustified clarity”, a poem that lives on a 14-foot möbius strip.  With no beginning or end, this piece is potentially endless; I read about seven feet of it here in 10 minutes or so.  Prepare yourself for quite a ride.  Accompanied by the awesome Michael S. Johnson on improv keyboard.

Here I offer advice on how to deal with the corporate oligarchy in three spoken word pieces at Sparring With Beatnik Ghosts, Round 9

P.S. the second piece is a good version of “DIY” from the Fresh Words page.

The Food in My Beard

Yes, I am reading from a very high pulpit, in the back room of the Swift Hibernian Lounge in New York.  This surreal video was taken from just below, and offers an excellent rendition of my homage to the food chain, “The Food in My Beard”.

I Want A Poetry

Mediocre video of a good performance of this cute little diatribe.

From the Poem Dome fundraiser at
Kaleidoscope SF
April 23, 2010

P.S. – You can find the text for this piece on my page in Esque #3: Revolutionesque

I perform sections of “nameless, unreasoning, unjustified clarity”, written on a 14-foot long mobius strip, amidst (and playing with) my exhibition of text art called Parallax Poems at Nomadic Press in Fruitvale, Oakland, California. This video splices many short soundbytes together, effectively rearranging and reinventing the piece much like the Blinklists do to themselves.

You can see another, longer excerpt above.

Here are three pieces from a series that I work on intermittently, putting words to pieces by the contemporary German composer Hauschka, aka Volker Bertelmann.  I’d been listening to him avidly for a few years, and realized that with the music on one album in particular, I always had similar imagery running through my head of a woman going through her days.  So I started writing it down, and here are the results so far.

Written and performed to “Alexanderplatz” from the album Foreign Landscapes by Hauschka.

Written and performed to “Iron Shoes” from the album Foreign Landscapes by Hauschka.

Written and performed to “Mount Hood” from the album Foreign Landscapes by Hauschka.

In 1990, We Press released a strange chapbook of mine titled Influx Blinklists, documenting a form of writing I did briefly that led to the development of the text art pieces that I later also called blinklists. A reading was done at the Boulder Art Center in July of that year to introduce the work, comprising three multi-voice pieces, two of which were accompanied by music. Since the pieces were meant, among other things, to explore and celebrate the plasticity of words (a deft brush with language poetry, perhaps?), somehow the idea of crowdspeak seemed most appropriate for the event.

Here are the three pieces, taken from an old VHS tape and sadly blurry, but with good audio. So dive in and see what you think.

Here are a scattering of old videos of poems rescued from VHS.  Mostly they’re filmed recitations in various spaces and settings, rather than documented poetry readings, as you’ll see by clicking on any one of ’em.

Filmed behind a house on Lawrence Street in Ann Arbor, MI
December, 1990

Filmed in my room on Pine Street in Boulder, CO
January, 1991

Somehow two lines got cut from this video, and it’s almost completely black (on purpose), but it’s odd enough to post anyway.  The missing lines come after the word “fray,” and before “the world crowds in…”  Here’s how that part of the poem would read:

“And you a moment parted from the fray.
Then there comes a period of pain
where you begin to function once again,
the world crowds in…”

I did the mystical videography on this piece.

and more to come… 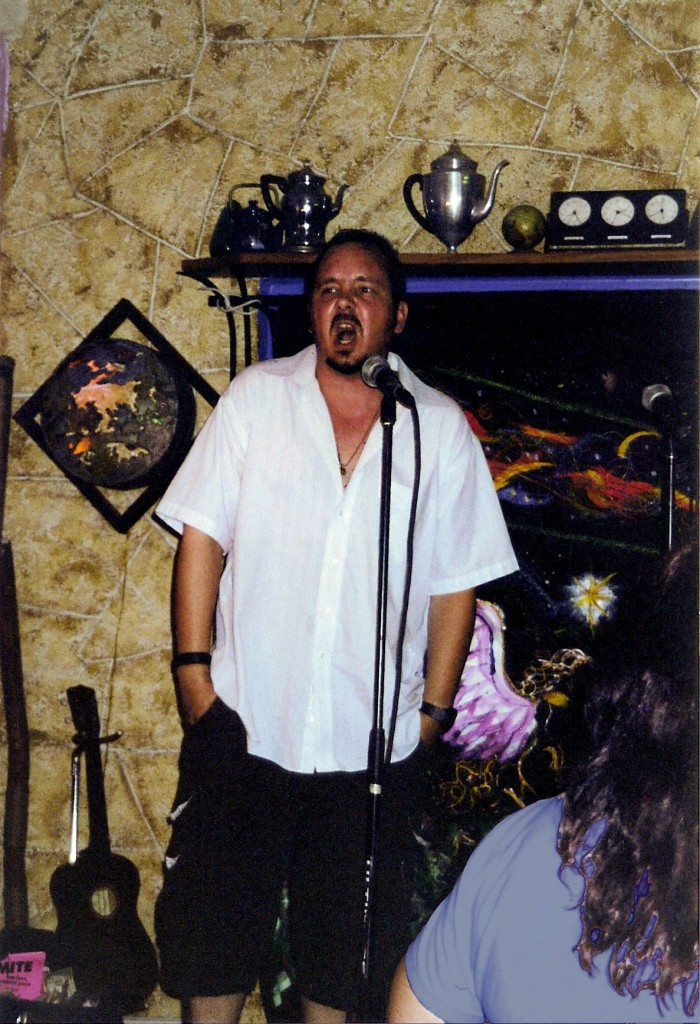