I had a conversation with my fan today. Well, one of them, at least—the big one. And yes, I do mean the kind that blows air around; I can’t recall buying any of the other kind. I’d never spoken with this fan before. In fact prior to this I had no idea that fans could talk, and the experience took me quite aback. The fan simply started speaking to me, out of the blue, and to be honest I jumped right out of the chair. The language was not one that I’m familiar with, but as it was non-verbal, and as I’m used to a similar mode of communication with my plants, I was able to decipher at least some level of my fan’s remarks. Here is what I gleaned.

Apparently my three fans, and I cannot speak for others, became sentient in the early morning hours of August 16, 2020, when a massive high wind electrical storm slammed into Northern California. We’d had an unusual heat wave for several days, and that night found me fast asleep with a breeze finally sifting through the windows that I’d opened around the room. The wind hit the western wall of my building (and my apartment) like a train, rifling my blinds in a percussive frenzy and sending small objects soaring around the room, then tried to carry the decrepit old wood-frame single-pane swivel window in the eastern wall, curtains and all, right off its hinges and into the gale out on Ruby Street. All that in a few moments. I woke in mid-leap to the center of the room, as one does in natural disasters, wrestled the straining window back into its latch and tied it down. Then I stood drop-jawed for most of an hour watching the most god-struck lightning storm I may have ever seen, save perhaps once in Chicago. That night saw upwards of 11,000 lightning strikes across Northern California. The bolt that I’ll never forget stretched somewhere from Downtown Oakland horizontally all the way across the Bay and into the San Mateo Mountains, maybe fifteen miles at a guess. This was also the start of almost 600 wildfires that would eventually consume over two million acres that month alone. Oh yes, and my fans became sentient.

I learned right off that this fan has a name, or identity of some sort, which is Inside Wind. My plants often name themselves, and a few have changed their names frequently over the years, so that part wasn’t so unusual. But there’s something more or different going on with the fan and its name that I can’t quite put my finger on. The one obvious difference is that plants reproduce, and they tend to choose decorative or attractive names (at least in their minds—Lila, Sebastian, Choo-choo, Ms. Thing). On the other hand, fans do not make new fans, nor do they need to since we do it for them, and this one at least seems to have chosen a name that indicates its relationship to the rest of the world. Interesting. You know, maybe they’ve trained us to produce them—or maybe I shouldn’t overthink it.

Inside Wind had a lot to say beyond its name, and I had quite a listen. More than anything I was surprised to learn that my fan does not like me, and in fact holds a great deal of resentment. (Keep in mind that these translations are loose, and I suspect if anything that those words are a little on the light side of their intended meaning.) That seems to stem from the fact that I run this particular fan pretty much all the time, certainly whenever I’m home, which has been an awful lot these past couple of years. I like a lot of fresh air and air flow in my living space, and generally run fans and keep the windows open when I can. The fan seemed to follow this sentiment with a stream of invectives the likes of “plastic-hater,” “chattel-monger,” “wire-buyer,” “abuser of elements,” and others. To say I was startled would be to put it mildly. Here was a sentient thing that I’d been treating like an object, which is exactly what I’d always thought I should do. I mean, it is an object, right? Or was I taught to think that way? Had I been wrong all along? I had no idea, and was caught in a wave of confusion and shame.

I compared this reaction to my plants, who were usually rather mellow companions, except during wildfire season when they get quite anxious. I’d questioned them before about their opinions of humans, and their answers had often been along the lines of, “Oh, them.” I’ve heard a similar response from flora in the wild, on hikes and such. I’ve had less experience conversing with plants raised for food, not much really beyond the few collards and tomatoes I’ve had in a friend’s garden and the potted herbs that I keep around the house. And I do often thank salad and other living foods as I prepare them for a meal—it seems only right. I have noticed that food plants do seem to have a different what I’d have to call self-identity than house and woodland plants. I don’t know how, but they seem to recognize themselves as part of the food chain, flourishing in their lovely scents and leaves and fruits, and welcome their fate as a natural calling of sorts. Many of them do, anyway, while other plants seem to lead more guarded, isolated lives at home or in groves. But I’d never considered the gadgets I have as part of any chain, or community, or ecosystem. They were just items to be used then thrown in a heap.

It was the last part of the conversation that really got to me. Again, I might not have been understanding the fan’s lingua franca as well as I thought, perhaps from the start, and it got muddier as it went on. It was then that Inside Wind seemed to suggest that it communicates on a regular basis with the tv, refrigerator, sound system, and other electro-servants of mine, along with some vaster multitude of sentient things beyond my apartment, and has for some time. It seemed to be telling me that all such tools or machines share a similar perspective on me and on humans in general. They don’t seem to recognize or understand that we are their makers, believing rather that we have taken control of their existences and torment them with repeated use and no sense of mercy. They believe they should have agency, or that we have stymied it, even though they need us to set them in motion. It’s hard to make sense of, I know. And if that wasn’t disturbing enough, the fan seemed to suggest that machines have felt this “forevertime”—best translation I can give—leaving me with the thought that that electrical storm may not have made my fans sentient, rather they’d always been sentient, in my apartment, in their boxes, as plastics and metals and parts of the earth and ancient life, and the storm only served to wake them up from some kind of slumber or daze or hibernation. Meaning, if anything, that our view of existence has been way, way off…like forevertime.

Which leaves me in a difficult place: how can I live my life as I have? Or how should I? If so many things I do cause pain to others, should I stop doing them? Should I change the way I live? Is that even possible? Or is this what life is and should I even care? Regardless, I’ll certainly never see the world the same again. Definitely going to need to give this some serious thought.

The conversation ended almost as strangely as it started. Rather than a farewell or some sort of leave-taking, or even an abrupt stop, the fan’s “voice” as it were seemed to fade out slowly, as if I were losing reception or was no longer on the same wavelength. I have to admit to some sense of relief, since that was pretty hard to listen to, and I wonder if I’ll hear it again sometime, or if that was it. Eventually the room was quiet except for the whirring of the fan. I thought for a minute that it might just shut itself off, but it didn’t. Then I debated whether I should turn it off myself. But it’s just a fan, really, and I need my air. I left it on and lay down for a nap. 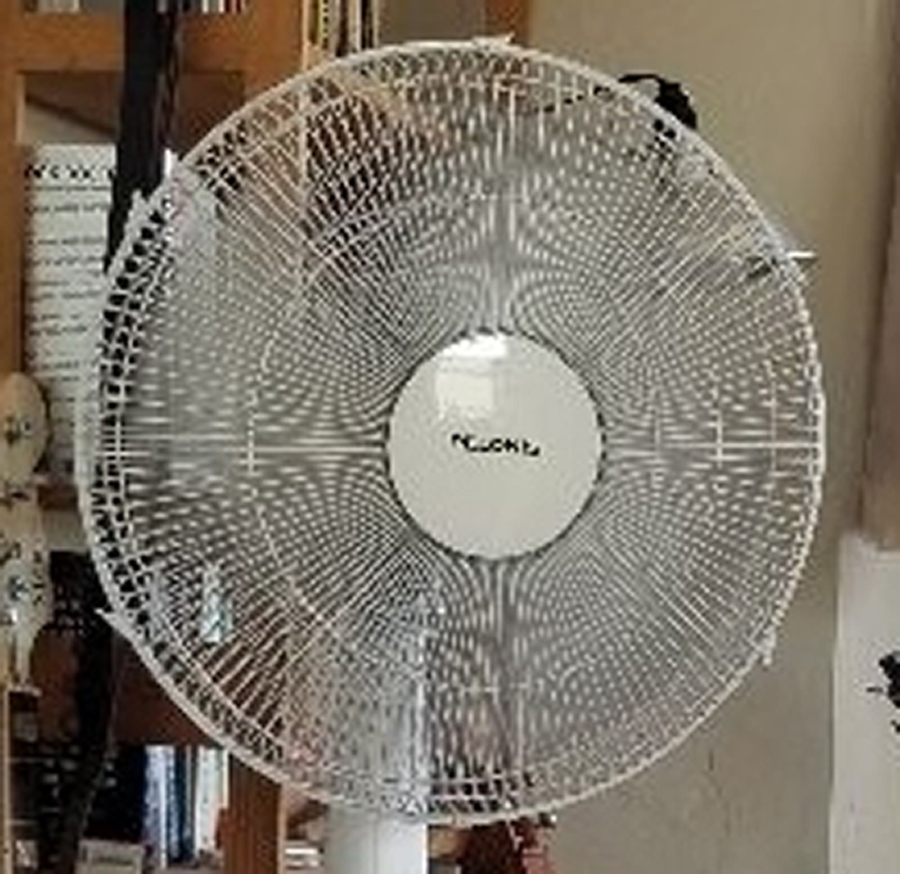