Thousands of butterflies, hundreds of hummingbirds, pines and alder and dogs and lizards everywhere.  Flies of every size and color.  Strange horned beetles.  A chicken hutch.  An old woodshed.  A blue log cabin on a long dirt road.

And across the road, McKinney Creek, burbling pleasedly on, which pours from rocks some three miles south, and empties into the clear, clear Klamath five miles north.  Here I am at the end of May, at the start of creation, miles from everywhere, feeling like Richard Brautigan riding a giant lark.  No need to fish because the fish fish me.  Under the shade of a walnut tree, bugs up the nose and moths amok, cicadas and pine sap and birdsong everywhere, and who wouldn’t want to be here, who lies on grass, who sits dappled under leaves and feeds on sweet breeze.

After a rough return and a rough month back in the normally idyllic Bay Area, I am treated to a pinch of paradise with an opportunity to visit folks up Klamath River way.  First I’m greeted at my home by old friend and soul-digger Tobias Brill, fantastical artist of demons, crime, sex, and truth, fresh in from Pahoa, Hawai’i.  Spent a few bustley days by the Bay, hanging with Tobias and the joyous Pam Ybanez, maker of many things. Then T + I jaunted in my trusty jalopy north, north, north to the homestead of his most transcendent mom Barbara and her partner Andy (wait, now married, in their 60’s no less – rock steady!).  Forty minutes out of Yreka, CA, a small town as it is, just shy of the Oregon border, and we are in the hills, and I mean IN.  Spent the final few days of a difficult month lying on grass, hiking through forest and high meadow heather, and shaking off city in the pine-stung sky.  Wrote a swell little poem in that very meadow, which you can peruse on the Fresh Words page if you like.  Barbara and Andy have been building this home for a couple of years now, really working it from scratch, and they are flourishing with a comfortable house, a garden from heaven, and hospitality to shame the gods.  Current projects:  a new chicken coop, plans for some hydro-electric and solar to supplement the generator, and a big new workshop for metal and crafts.  Also present were Barbara’s brother David, pioneer and world sailor, with whom we shot a bit of skeet; sis-in-law Julie, grommetor and chef extraordinaire; and niece Lena, botanist and good vibe maven.  An elemental family, churning and nurturing, and all my gratefuls dance for them for the chance to breathe a few days there.

A few other tidbits of note this month.

Friend and fellow poet Brant Lyon passed away suddenly on May 12 in NYC, as mentioned on this page last month.  An instigator of many creative whirlwinds, Brant is sorely missed.  I’ve written an elegy for him, which you can find on the Fresh Words page.  There are a few memorial events this month in New York, at the very least on June 9, 16, and 28.  Details can be found on the great weather for MEDIA website, a new press of which he was a founding editor.

Was taken out for a night of theatre by fabulousness personified Susan Pedrick to see two works by my yum-yum favorite Sam Beckett, put on by ACT in San Francisco.  “Endgame”, perhaps the dourest of Beckett’s sprees, was performed with finesse by Bill Irwin as Hamm and (especially) Nick Gabriel as Clov, though the actor’s efforts to bring a sense of lift to the scene is thwarted (as is often the case) by the dark side of Beckett’s force that pervades this work.  Still it was a pleasure to witness the master at (not quite) play.  I must thank ACT, though, for pairing it with his rarely-produced short piece “Play”, where he does just that and with greatest glee, twisting what might be the darkest of scenarios, three heads in urns babbling haplessly about their fatal lover’s triangle, into a comic catastrophe.  Though you may not make it to ACT, I recommend catching the terrific version of “Play” directed by Anthony Minghella on disc 4 of Beckett on Film (which also, by the way, contains “Endgame”) (and which is even available on Netflix) (or in my apartment) (oh hell, just watch them all somehow).

A couple weeks ago I perused Electro Perdix, a new chapbook of poetry writ mostly by Christopher Funkhouser (with a few collaborators), and this is what I thought.  There is a delicacy in these words that yields their strength, and a darting that moves us from place to place, often unexpected, like a runner in an unknown geography.  Here Funkhouser proffers non-narrative narratives of semantic genes, and giddy recipes for recalcitrance:

— this the full text of “A fortunate enjoy”.  His context challenges and scrambles, his syntax hails a cut-up, and his form displays a joy of mixed technique, with pieces, for example, authored by several writers, and, we must wonder, given his interest in digital poetry and the implications of the title itself, perhaps in concert with circuitry.  Yet as contemporary as his language work may be, the poems in this collection hearken to the playfulness of the Dada- and Surrealists, and the sheer break from preconception of the Abstract Expressionists – some of these could be verbal equivalents of the sculptures of David Smith or the semi-figurative paintings of Paul Klee.  All this suffused with a focused, human, meditative tone.  How else could he present us with lines the likes of: “Furrows is a word like wrinkles in time, like standing on the river with your eyes closed, like remembering why the word first called to you and echo was love.  pure love, echo.”   Intrigued?  Then go pick up a copy and intrigue yourself some more.

So juxtaposed to my recent days.

I lay for an hour on a long log bridge a few feet above McKinney Creek, letting the language of mud and stone pour over me.  WCW was so right when he suggested we look to the river for new language – and, I think, for the first.  Get ye out of the cities, Children, and salve your words in a watery course.  Only the dapple of leaves can show you certain truths.

And this is not a blog. 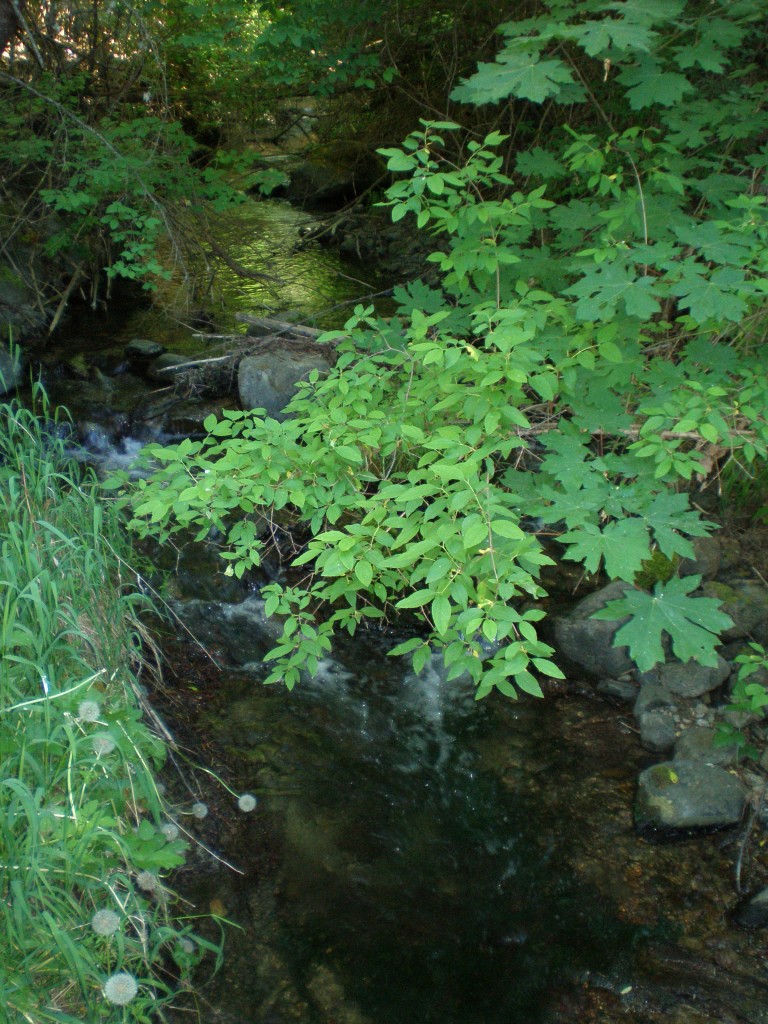