A wood-paneled room with no windows, perhaps sixty feet long and thirty wide, with many chairs of different sorts, all facing the center, in some way or another, or, variously, each other. The majority of them, close to a hundred, tightly grouped with a central aisle, are set in one half of the room that might be called the back end, all facing the farther side or front. Ahead of them are a scattering more behind two tables, but separated from the large group by a low wood dividing wall. Toward the farther wall, beyond a good bit of empty space, perhaps a quarter length of the room, sit two chairs only, larger and raised upon a dais and set behind expansive tables, facing the main group from afar. Along one side wall in the front half of the room are fourteen chairs exactly, in two even tiers. And facing them, against the farther long wall, a single chair, conspicuous in its singularity, set behind its own low divider, as in the safely of a nook. The foam ceiling panels hang low, the lights fluorescent and embedded, every feature designed to muffle sound and focus all upon that center space, ostensibly empty, where, esoteric and fleeting, expectant and raw, swirls presence, worry, conviction, despair, the creation and failure of human truths.

UPCOMING EVENTS  ::  Not currently accepting readings myself, but I am hosting a few events coming up. First, on Thursday, May 9, I will cheerfully MC (I promise) along with Paul Corman-Roberts (I can’t promise) Babar in Exile #18, at The Octopus Literary Salon as usual. This time we’ll be featuring the marvelous and understated Glenn Ingersoll, along with the marvelous and less understated Deborah Fruchey. As our “Honorary Babarian”, we’ll have rad younger poet Yume Kim, who might just tear up the word “understated” and eat it. Go Yume! Yume yay!  ::  I’ll bookend the month on Wednesday, May 29 with the third installment of #we, my new talk and reading series of queer perspectives. This time blind poet Leah Gardner will speak on “Atypical Grit: A Poetic Exploration” and perform relevant pieces of poetry, and teacher and social justice writer Elaine C. Brown a.k.a. Poet E Spoken will give a talk titled “A Triple Dose of Being Black, Woman, & Queer”, followed by a selection of poetry. A Q&A and chat time will follow. Again at the fab Octopus Literary Salon, Oakland’s pillar of free speech and beauty (and a damn fine cafe). Please stop by for a very interesting and informative hour. Free of charge and a hat will be passed.  ::  Speaking of free speech and beauty, the Octopus Literary Salon, which I will never tire of mentioning, has been struggling to make ends meet amidst the scourge we call Late Capitalism. The Octopus has been an enormous boon (and venue) for East Bay poetry and music for several years now, offering bookings with no charge six evenings a week all damn year, and as far as I’m concerned, they deserve a little giveback. I was consulting recently with co-owner Rebecca Grove on their new Local Authors shelves, and could see how flustered she was by all this, and found myself saying the ominous words, “Let’s put on a benefit for you.” And so I’m organizing a 12-hour show of poetry and music to benefit the Octopus on Sunday, July 21, which we’ll be calling Octopus Day. I’m hoping for 100 poets and at least a dozen music acts, which seems quite doable. And you, reader, have more than two months at this point to save up at least $20 to give to the Octopus, so start saving now. There’s on PR for it yet, and please please please don’t ask me to read, because I’m not organizing lists yet either, but soon there’ll be word, and hopefully a small contingent of folks to help with all of that. So keep an eye open and save the date. If you want to read at this Kraken of a show, especially if you’re read there before, there will be a way to sign up. If you’re local and don’t read or even if we run out of reading slots, please come by anyway and throw us a Jackson (or several). And if you’re not local and want to help out anyway, keep an eye open for ways to donate. The Octopus is a great friend to poetry, which makes it a great friend to all life everywhere.

Swirling, the flesh charges and exudes, darts back and forth, holds place as the other becomes a cloud, hydrate or toxic, hard to tell. Frankness of voice abolished while frankness of flesh and scent bound and abound, dancing the reluctant duel of perhaps, the murk of human happenstance slicing a vein here and a mind there, a kind of rational reprisal that leaves a body rent. The cloud strikes up a song and the chairs are gone, only plummeting remains, plunging and chattering, gallantry and gulf – the surge, the surge, what could have happened and what could have drawn, lines drawn and crossed before they’ve had a chance to dawn, a circling, a raptor, a pawn. Cloud and flesh, flesh and cloud in a rondo of movement and sound.

UPCOMING PUBLICATION  ::  I’m actually thrilled to have a poem included in the new queer anthology put out by Lambda Literary, Stonewall’s Legacy. The poem accepted was “#we”, which totally not by coincidence has the same title as my new talk and reading series, because I wrote it as a current perspective on queerness for the first event in the series, and frankly, the title totally worked for the poem as well. When I heard about the submission call, I thought, “What the heck” (I actually did think the word “heck”), and sent it in solo, which makes me all the more pleased to have had it accepted. The anth is coming out in June, which will be the 50th anniversary of the Stonewall Riots. I’ve seen the proof copy and it is awesome, over 300 pages with work by 80 very eclectic poets. Which makes me quite honored as well. If you want to read a little more about it, you can do so here, where you can also pre-order copies for a mere $20 each. That’s only 6¢ a page and 25¢ a poet. How thrifty is that?

A great round table that challenges the feck of round; a circle that shimmers to dodecagon then back; a series of points that become and refrain; a chorus that breaks like a ring, chimes whole for a moment, then stills. The points become axes become axels become staves, speaking as spokes they tremble and radiate inward as radii steeling themselves for the flash. The flash, each a flash and a mudpool, a shine and a shadow spinning and flipping like coins on a fairway rail. Then radiance strikes, each point bursting and shimmering light of their own, wavelengths clashing and blending but most staying strong, somewhat strong, strong or not, steady, and sure. One wavers and stays, another shifts or shifts back, and slowly and surely they all steady on, blending a tone in the center, a spectrum that only they own.

REFLECT  ::  I missed this post last month both through busyness and a lack of enthusiasm and focus. I’m going through a lengthy reevaluation of my life, whatever that means, and there’re gonna be some changes. But I can’t say what just yet. Unhappy at my level of focus on writing, and creative acts in general, for some time now, and not feeling very part of community. I tend to be more productive when I don’t have much paid work, and just create and organize events, or even when I have a lot of work but not much organizing to do, but not both. Since I gotta make the spaghetti, and keep trying to pull myself a livable share out of American debt, I’m allowing myself to get my business in better shape, and I’m cutting back on organizing. I expect those cutbacks to become greater over the next year, because it really does infringe on my own work, and I have a LOT of that to do in order to be happy with myself again. Consequently, I’ve mostly been fallow the last few months, not going to many readings or events, and organizing only what I’ve agreed to. Craving a quieter, less stressful existence, and thinking of moving away from the Bay Area with all of its conflicts and agendas and greed and general mad brokenness, though I’m too poor to do so for a while and not sure where I’d go if I did. I’ve moved a lot of times, and if I do it again, I’d rather it be to a place in which I might actually feel settled. Comfortable and energized by community. What place is that, if any at all, and when will a movement commence? Time will tell, and so will quietude, so quietude and time I shall have.

REFLECT  ::  One interesting experience during the last few months was being on a jury for a week-long criminal trial toward the end of March. I wasn’t very comfortable deciding on someone’s fate, or even deciding what actually happened in a situation that wasn’t clear cut, but it was a fascinating and very focused week. The prose pieces on this page are actually a result of that experience, an attempt to describe the human energies in the various rooms at certain stages of the trial without actually mentioning what they’re describing. I’m pretty happy with how they came out, though some might find them too abstract. Spoilering a bit by even telling this, as I really don’t think the reader should know where the descriptions come from, but since I like them, and it was an interesting experience, thought I’d include this little easter egg for anyone who happens to read this passage. P.S., the photo at the bottom of the page is of a corkboard right outside the courtroom that happened to be free of notices at that time, and which I found to be a beautiful sort of document. It’s worth clicking on and viewing full-size and magnified to see the details.

Yours in reasonable doubt,
Richard 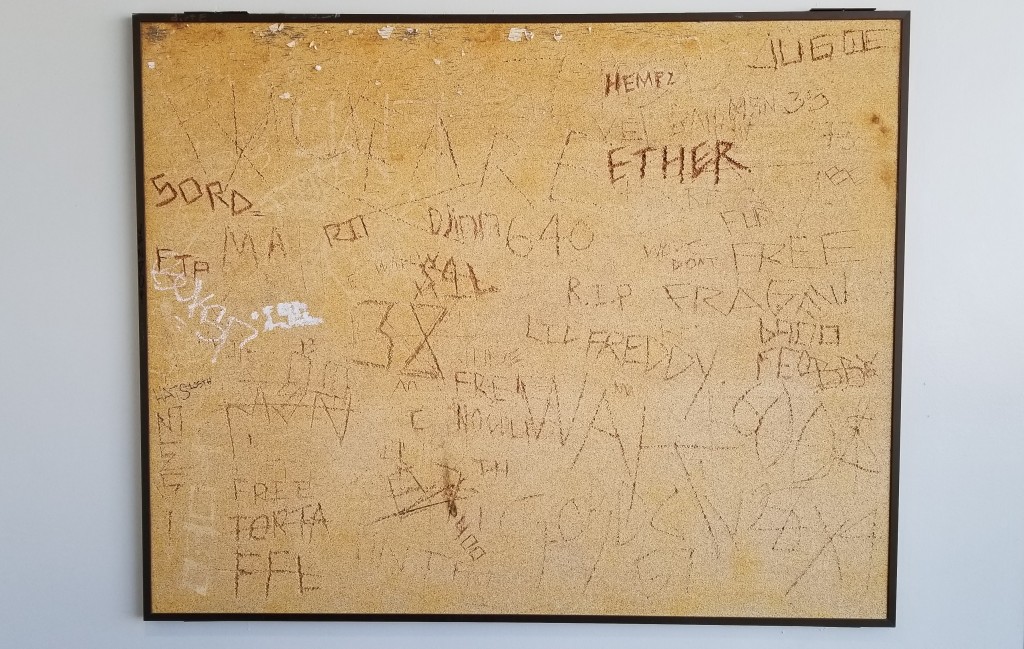