She steps outside and is transformed. Or maybe I am. Or everything is. I am outside until I meet her, then she and I become we, that specific we standing under a towering oak beneath a steel grey sky, in a breeze that smells of damp leaves, talking about an old farmhouse that we were in long ago, deciding to share a pot of oolong tea.

UPCOMING EVENTS  ::  I’m doing three readings in September so far, and I might sneak in another one or two just to be devious.  ::  Saturday, September 8 sees the end of The Lost Door on Illinois Street in SF, which has been spewing out art and music and radness since the 80’s, and is being torn down for more all-so-important tech condos, and which we will commemorate with a blowout to end all blowouts. I’ll be hosting and gleefully watching everything explode, and listening to the apocalyptic sounds of Ovarian Trolley, Hazy Loper, Tin Sandwich, StRiCtLy AlBeRt, and cameo appearances by Ruby Howl and Hall Flowers. Come watch part of San Francisco die. And I only say that because I’ve loved her so well.  ::  Thursday, September 13 I’ll be reading in the Break-Up Show from Moon Drop Productions, in Uptown, Oakland at Chapter 510 with a bunch of really pissed off single poets. Just kidding. Maybe. There will be feelings.  ::  And Tuesday, September 18 sees the release Nomadic Journal: Wonder, the new anthology from Nomadic Press. It’s also a Get Lit show, as usual at the fabulous Ale Industries in Jingletown, Oakland, so you can expect lots of new shit as well as reading from the Book of Wonder. Come one down and take home some fresh-smelling paper!  ::  Deets for all on the Events page, par norm. Shoo-ee!

When we breathe, we shatter any doubt that we are separate from the world, and the world from us. So when we go outside, we might as well be inside out in relation to everything else, or we might simply be so, or be seen as such. Consider yourself inside out, just as a matter of perspective. Where are you then? And what then is outside? Is that not now inside you, vast and uncompromised? Are you not vast, in any perspective?

NEW PUBLICATION  ::  I’m pleased to have a piece in the new and long-anticipated anthology from Nomadic Press, Nomadic Journal: Wonder. This one has a sterling collection of work from 28 writers across the U.S., plus artwork by the late José Nava and black-and-white photographs by Jesse Brouns. In other words, it looks terrific. My piece def represents Oakland, being a brief poetric diatribe on the nature of gentrification called “The Oakland Sky”. Check out the SF Bay Area release on September 18 if you’re around. Deets on that reading above and on the Events page, and more about the journal on the Anthologies & Journals page. Yay!

Outside the body is so frightening because it can get inside the body. This can happen in a number of ways, some more violating than others. Some can harm or kill you, can damage the body. Some can damage the mind, or both. Maybe every way damages both. Perhaps any admission helps the inside to break down; perhaps that’s what the outside does. Still some ways seem more okay than others, some necessary if distasteful so we make them seem okay, like sex, like needles, like eating. When we eat, of course, we take someone else’s body into our own – our insides break down their insides. In that way eating could be helpful, could be goodness, or could just as well be terrifying. In fact, depending on your perspective, pretty much everything could be terrifying, unless of course there is no inside or outside, unless there are no foreign objects.

REFLECT  ::  I’ve mentioned above and elsewhere that I’m hosting a show on Saturday, September 8, called the Last Lost Door show. This is to commemorate the closing of a row of artist warehouses along Illinois Street by India Basin in San Francisco, which have been active since the 1980’s. In fact, if I’m not mistaken, they are the last vestige of the great boom of art warehouses from that period, and their passing marks an important if dark moment in San Francisco’s history. They sprang up at the time in a city (and a country, and a world) that was much, much freer from economic constraints than the one we live in today; it may have been well underway by then, but corporations did not yet have a death grip on the American soul. Of course there were many social issues to confront, but artists could do that, or go their own way, with more or less the freedom to create whatever they could think of, yes within budget but without being enslaved to wage earning. There was Shotwell Mansion on, well, Shotwell (now home of ODC Dance Commons), Studio 4 on Potrero and then Mariposa (the first of them moved to make way for luxury “lofts”), Shred of Dignity with the Skaters’ Union South of Market, the collective at The Farm (now extant in another incarnation), and right alongside, the heyday of Theater Artaud, and Artists Television Access, and Klub Kommotion, and Intersection for the Arts…. Those just off the top of my head. But in came the money, and out went the freethinking anything-goes unbidden-by-cash art scene, slowly at first, but the 90’s transformed this city, for better or worse (for richer or poorer), leaving it bound to quasi-liberal corporate ideals and ideologies that has crushed and cramped the creativity of San Francisco into tiny pockets of brilliance surrounded by heaps and heaps of money-focused art-people, leaving those who don’t take Capitalism into their hearts to be ground and shoved, ground and shoved aside. We all know this, and of course the corporations think that’s fine, most of their employees serfs servants chattel & sycophants think that’s fine, many Americans think that’s fine – but it’s not fine. It is, in a word, horrific. In my Home Page Post from May of this year, The Unplanned Obsolescence of the American City, I note that San Francisco has seen “whole neighborhoods ravaged by wealth” – and that’s true, anyone who’s been around here a while has seen it, though the turn of phrase does seem to take some people aback. But it’s more than that, it’s worse than that, because it’s not just about wealth running rampant, which seems so…abstract, it’s about the utter lack of empathy that these corporations and their minions have shown for the the people of this city, for the people who made this city what it is (or was, until they came along). The disinterest and lack of compassion, let alone understanding, with which this tide has swept through the area, is stunning and revealing, despite the liberal facades raised by certain corporate pr machines. Here’s an interesting quote for you:

“In my work with the defendants, I was searching for the nature of evil and I now think I have come close to defining it. A lack of empathy. It’s the one characteristic that connects all the defendants, a genuine incapacity to feel with their fellow men. Evil, I think, is the absence of empathy.”

Captain G. M. Gilbert, the Army psychologist assigned to
watching the defendants at the Nuremberg trials

An overly dramatic quote, perhaps – or is it? Because these people have killed the culture of a city, the cultures, or at best have turned them into sideshows of their former qualities, all for their own amusement; the Mission, the Haight, even Chinatown and North Beach seem like theme parks of their former selves. And when the rides are no longer fun, out they go. The homeless sometimes seem like the only real thing, the only real people left in the city. I’ve heard them compared to a cancer by flippant tech bros on the BART, when in fact they might be much of what’s left of the body, the body of the city, once the real cancer has spread through, has consumed everything it can. These warehouses are just another meal to the beast, barely worth a belch, these warehouses that have been making great fucking music and art and radness since the 80’s. It’s astounding that they’ve managed to hang on this long…and in my mind, this marks the death of part of the old creative core of San Francisco, certainly part of its beating heart that was not obsessively focused on capitalism, power, and money, money, money. I’m not saying that there will no longer be creativity in the city, there certainly will, but of an altered sort, one more and more beholden to and adulterated by capital than ever before. This show is in some ways a funeral – maybe more of a wake – of a true free creative era for this sad city. There have been many evictions, yes, and there will be many more, but in an essential way these evictions seem to mark the dying gasps, the death rattle of the old San Francisco, a city of true culture, true diversity, true connection, true art, and true humanity. 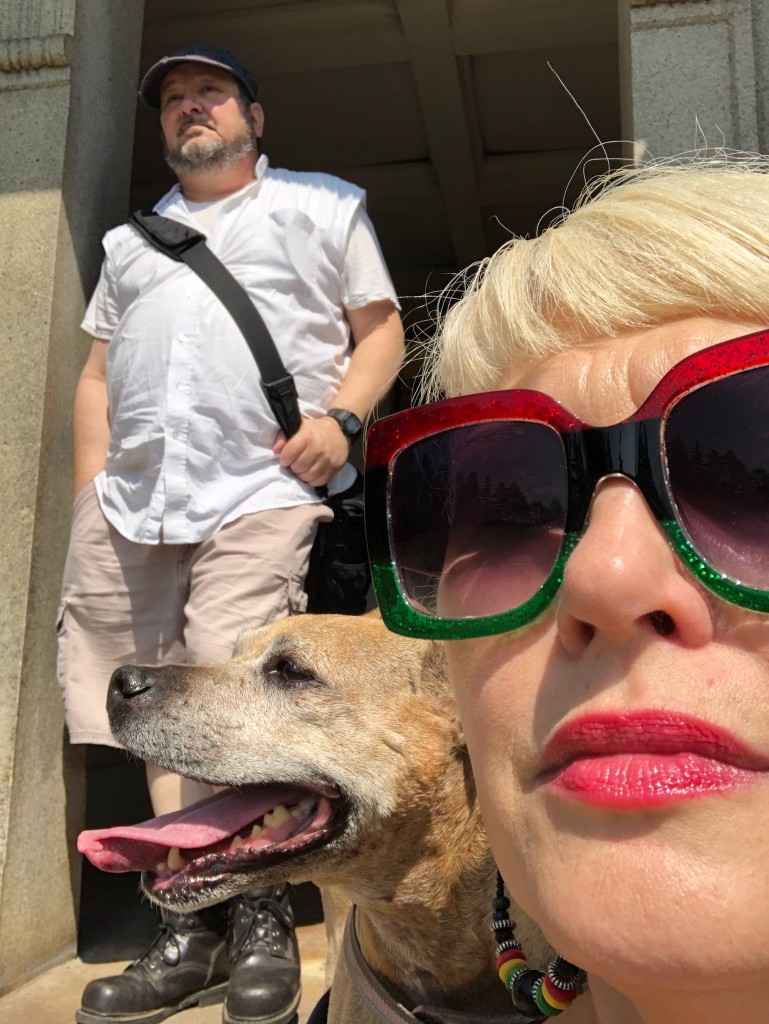