We’re drawn to groups like gnats, filings to a magnet, to streets, to walls, to cities for protection, propagation, prosperity. An ancient urge that transformed tribes to kingdoms, pummeled earth to towers, sectioned sky. And all was well, and grew, was grown, did grow seemingly without limit, eternal, unyielding but for spoilage wreaked by conflict and the occasional conflagration. But how unable or unwilling are we humans to recognize our own mortality, and that of all we see, messaged even in the things we craft, for even as a wall is built, it crumbles mote by mote. Which brings us to America. where cities have been tossed up, ejected from the earth and mind rapidly and with such gusto and so little reflection, like so much else here, that motes fly all the faster, that scant sane souls have had vision enough to foresee this murky time wherein our megalopoli have become paradise for several, while millions upon millions suck acrid air to occupy a broken clock, a desecration, a sewer, a war zone, an abattoir. Whenever I think the word hubris these days, I laugh uncontrollably for minutes.

ANNOUNCE  ::  I’m hosting one and doing two readings this month and I promise they’ll all be unrecognizably different. What?  ::  Monday, May 7 – I’m very pleased to feature once again at Poetry Express, Berkeley’s longest running weekly reading series. 7 pm at Himalayan Flavors. Stop by to check me out (ahem) and jump up for the speak-when-you-will open mic.  ::  Thursday, May 10 – I’ll be co-hosting Babar in Exile #13 with Paul Corman-Roberts at the The Octopus Literary Salon in beautiful Uptown Oakland. It’s our third birthday and to celebrate we’re featuring power-trio Daphne Gottlieb, Alvin Orloff, and “Honorary Babarian” Giavanna Ortiz de Candia. Come by and make it a power-everything by blamming the open mic.  ::  Finally but not finally, on Saturday, May 12 I’m very, very happy to be featuring at PCR’s New Crow Show along with Jenee Darden, Ruth Crossman, K.R. Morrison, ToReadAh Mikell, Laura Zink, Keith Mark Gaboury, Chris Smith and musical guest Giavanna Ortiz de Candia. Prepare to be neither bulled nor dozed. Not to be missed at 7pm down the stairs at La Val’s Subterranean in fabulous Berkeley, California. Deets for both my reads on the Events page, and for Babar on the Babar in Exile page. Of course!

When I was a beaming little poetry sprout queer punk bike messenger kid running around San Francisco of the 1980’s, I imagined many possible futures for that Oz-like city of hills, most bright and hopeful, some less so – it was an era of energetic optimism despite a lurk of dire shadows – but none of them included the image of self-important tech bros stepping over the wasted corpses of vilified addicts to board their opulent private buses. Yet that has become an all-too-real symbol for me of San Francisco today. The 80’s were a time of vim and piss and vinegar, punk vs. Reaganism, the first big homeless encampments (and their first bulldozings), still cheap rent, beautiful air, art and energy everywhere, flourishing cultures (queer and radical and traditional alike), the rearing horror of AIDS, and, in the umbra, the first tiny cracks in the mask of the age-old racist and classist power structure. Yet in all that mix, that roil, fending off greed and succoring the mad, none of us foresaw whole neighborhoods ravaged by wealth imbued with that selfsame classism and racism and self-importance, whole segments of the abiding population tossed onto the streets and spoon-fed opiates to near immobility and death, a horror movie sprung to life that somehow morphed that city of Oz into one more closely resembling the nightmare depictions of Metropolis and Soylent Green.

Last month I stepped out of that melee to the brick and stone boroughs of New York, where I’d lived for nine years, for a brief visit.  I’d always considered New York to be a broken city, buckling under the weight of nine million people, but I was astounded to see the deterioration in just my few years’ absence – subway systems barely functioning, streets not just clogged but impassible, buildings crumbling onto sidewalks, concrete infrastructures well past their half-life, power grids in question, scary water and air, toxic effluvia everywhere, and a citizenry increasingly perplexed by how to live there (that’s live, not thrive), and more so by how to leave, at least for those who are not inextricably fused to the machine. Sure, there are still shows, and parks, and millions of restaurants, bars, and clubs, plenty of pleasures and spectacle, but there’s also the sense that the whole thing could fall down at any minute, could crumble to dust or implode with cinematic flair. No need for giant monsters to break this city; it’s become its own giant monster, geared up to break itself.

The endemic lack of human foresight always startles me (my own included, of course), our frequent inability to fix a problem or mitigate a hazard until it’s too late; our innate incapacity to see what’s really in the mirror, or often right in front of us, or what will be; our indelible hubris (there’s that word again) to imagine that we are immortal, that our systems are unbreakable, that our monuments last. But they are not, and do not, and nor do we, and even though we really do know this (really, really, really, say it again), we are somehow startled again and again to find ourselves standing in rubble, in the wreckage of human lives and cultures, in the what-once-was of our great ambitions. Yet it is precisely that ambition, that zeal to make a mark, to scratch and pummel, to build, that leaves us in the dust, blown and scattered by the winds of time, of age, of entropy, the winds of greed, of the excess and corruption of Late Capitalism, the winds of our limited flesh.

In the heart of candor, steel cracks, splits, and out pours music of a new and quantum form – airy, molecular, drifting into grass. The gravestones lean against the tower for support, didn’t used to need but the tired age necessitates. Some guru omming on a couch turns the channel and imbibes a singalong with puppets and despair. Does he make the world he captures, or does it make him? Yes, and of course no, for making is a misconceived intent. It is in fact only the making that makes. The steel does not crack – the steel steels and the crack cracks. The pouring pours, the music musics, the form forms, and the candor – well, isn’t that the rub. The candor doesn’t need to candor because everything else does. And the moment, the second, the quantum that anything doesn’t candor, it is unmade.

REFLECT  ::  Had a pleasantish and mostly quiet trip back east last month, first with a stop to housesit for my mom a couple weeks in Cape May, NJ, and hang out with my brother Geff. Also did an interesting project, scanning hundreds of slides from the 1980’s into digital format. And I thought there were no pics of me from that insane decade. Not true! Apologies in advance if any of you get inundated with them sometime soon. Then shot up to the peaceful Hudson Valley for about nine days, a couple hours up the river from NYC and thank god for that. Spent a few days with illustrator/designer friends Drew Morrison and Jane Song and their vivulicious two-year-old Sienna, bouncing around doing familyish things and playing dress-up. Then up to Kingston for five days at the home of the wonderful Kristin Wolf and her verrrrrrrrrrry excited dog Sophie, overlooking the chill Upper Hudson. Had a chance to stop in to Phillip X. Levine‘s long-running Woodstock Poetry Society reading to hear, with great joy, the earthbound Donald Lev telling it like it absolutely is, and to cavort a moment with friends Andy Clausen and Pamela Twining. Blessed for all that. Also had the delightment of hanging thrice with Chris Funkhouser, media maven and wizard, once for dinner with his partner in awesomeness Amy Hufnagel and their daughter Alea, once to check out a really cool lecture at Bard College by Hope Hall, who was Barack Obama’s personal videographer through his presidency, and finally as a guest on POET RAY’D YO, his fab poetry radio show (I’m sure you’d have never guessed) through WGXC 90.7 FM in Hudson, NY. Also got to have a several hour conversation with compadre and filmmaker Jason Tallon while stopping through Hudson, which just made my damn year. Finally made a whirlwind spin through New York the City, where I was sheltered by the auspicious auspices of Ms. Jay Lobsterhead. In town all too briefly, I was yay’ed to check in with Jane Ormerod and partner-in-literary-crime Pete Darrell, novelist and branding whiz Michele Melnick, sublime poet Wanda Phipps, composer and maker of ancient instruments Ben Hume, and the questionably lonely Lonely Christopher. And if that didn’t leave me breathless enough, I gave a reading along with the fab Amy Lemmon at great weather for MEDIA‘s weekly reading series Spoken Word Sundays at East Village mainstay Parkside Lounge, this round hosted by thank you soooo much rockstar poet David Lawton, at which I hoped to leave the audience breathless, and tried to suck all the oxygen from the room at the very least. Home now finally home home home, and glad to be here, glad to have seen everyone – thank you all for remaining human – and glad to finish writing this over-linked post, which I’m sure you’ve been clicking through on for the past hour or so. Go now please and enjoy something. It’s May!

Rain in New York means birds. Out of the sky comes everything, regardless of the city, even as the city wreaks the sky. The streets splash in themselves, the buildings sigh with deionization, to have their flesh in the air once again. It’s all about the air. We call it clean, cleansing, smell that clean air – and that’s true, even as we walk through it shedding skin and effluvium. We call it fresh, renewed, unsalted, though with the salt goes some of the glue that holds the place together, draining into sewers with the trash and dead leaves. The place a crumbling manifest of hubris, of human urge. The place, the city, towering and stolid, in denial of its own mortality as any given lover, as a busy cook, as a reckless child by the sea. But the birds – they know, they come and go and always will, perched upon wires, upon towers, upon signs and posts, making their way from where to where to perch again, upon banks, upon monuments, upon rubble in the rain. 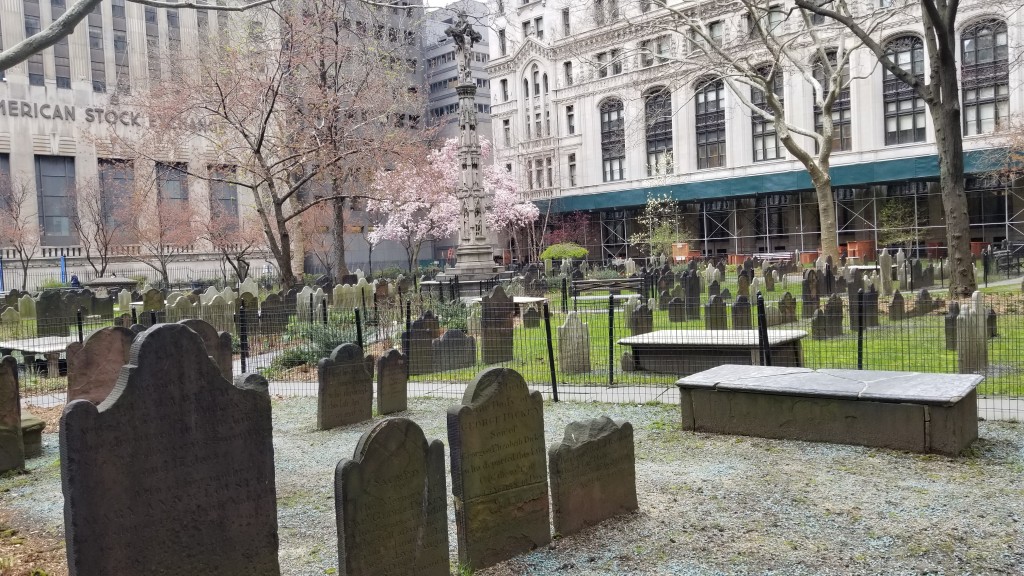