– that’s right, sky.  As in breathe, as in diffraction, as in streams.  As in casing.  As occlusion.  As particulates.  As scoring, as scratching.  As in clay.  As geophysics, as rationale, as law, as myth.  As in strata.  As in hierarchy, in sociopathy.  As in deeply, as in torn.  As flare, as blinding, as searing.  As in flesh.  As in children.  As in thunder, as in pressure.  As updraft.  As gale.  As in Fuck the Police.  As in looming.  As inevitable.  As in “Burn the bitch down.”

ANNOUNCE  ::  Two final readings for the year, and ones not to be missed.  First, on December 5, a conflagration of 80’s energy with a reunion of poets who tore that decade up (and several since).  They’d be Bruce Isaacson, who juiced the Café Babar scene and wrought it in print as Zeitgeist Press; Jennifer Joseph, former lead singer of The Furies, impresario of the Paradise Lounge reading series, and architect of Manic-D Press; and myself, he of an elusive past, killer of myths and ringer of many bells.  Joining us, and a welcome addition to the burning flock, will be Cassandra Dallett, contemp East Bay poet and asskicker and Manic-D’s latest author.  And if that’s not quite enough, on December 9 I’ll be stomping at a release party for the final issue of Out of Our magazine, alongside contributors William Taylor, Jr., Cassandra Dallett, Charlie Getter, Paul Corman-Roberts, Martin Hickel, James Zealous, and Out of Our editors Sarah Page and Steven Gray.  I don’t even know what to do with that list, except perhaps to toss ’em in a heap and pour on the fuel.  Miss at your own risk, my not-killed darlings, or better yet just haul your ass over to North Beach twice in one week and improve your fucking life.  Reading deets on the Events page, and Out of Our deets at Anthologies & Journals.

ASIDE  ::  Has anyone noticed that the twelve titles of this year’s Home Page posts comprise a poem?  Go to the Archive on the right, click on January 2014 to start, and read just the titles of each post in chrono order.  That is all.

Oakland burns and what’s the better for it – the anger of the disempowered manifest.  It always strikes me as odd/off/wrong, as it does many, when protesters destroy local businesses and property at the edges of their conflagration.  Beyond the opportunists, who take the occasion to loot/pilfer/tag for their own amusement and gain unrelated to the wrath at hand, I tend to consider their actions as counterproductive, working against the cause, whether they result from irrationality (the human response of lashing out), ignorance (a genuine belief that it makes a statement), or covert purpose (those who are actively working against the cause, or who are commissioned to do so).  But that’s just one facet, isn’t it?  Because the violence is not entirely that of personal device, but an effect of mob-mind, of hive-mind, an explosion made inevitable by the sheer physics of oppression and cultural infidelity, the bursting corpse of belief in democracy.  And of course not all of the violence is locally destructive – trash fires in the streets are an excellent sign of political disgust and disrepair; blocking traffic and disrupting business as usual is a time-tried tactic, and marching onto freeways is brilliant and worth cheering.  (I have to wonder why so many protests in the past few years have happened after dark, rather than during the hours of business and jurisprudence, as has been done often and effectively.)  Some would even say that there’s a valuable symbolic purpose to attacking the venues and outlets of major corporations – banks, giant marts, major chains – who might, in fact, support and proliferate oppressive social and political structures.  (I might be among them.)  But what’s the purpose of damaging/wrecking/burning little cafes and delis, mom & pop groceries and hardware stores and beauty salons?  Ferguson burns and what’s the better for it – institutionalized murder rolls on has it has.  Well one thing is – the energy is UP again, as another pustule has burst and the rancor is streaming once again, and let’s hope it keeps streaming, let’s keep it streaming, because this is an age for streaming rancor, because a lot of fucking things have got to change if we’re going to live with each other, and live on this planet, and live to the future, and that might be the only way to get essential change in motion, and certainly an effective way, to pour the fucking anger on the fire.  And that’s the value and the function of the smashing and the burning, that it fills the veins with blood, and wakes the nerves, and clears the head, and lets us charge full of our own life into the fray, into this corrupt mess we call culture, to bring down what needs to be brought down, and build up what needs to be built, and maybe, just maybe in the process even change ourselves the slightest bit, so that once new structures are built, and a modicum more racial/socioeconomic/gender/preference/ideological equality has been reached, at least for a moment, with likely more needed, we might be slightly less likely to corrupt ourselves, and begin killing others in the streets for our own broken reasons. 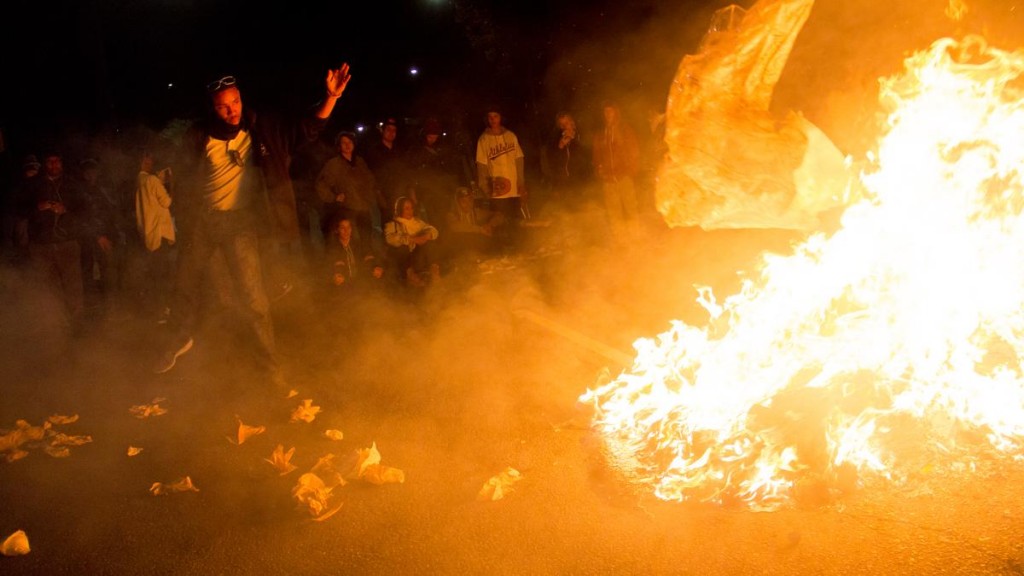 REFLECT  ::  Meanwhile a calmer if chilly sojourn just a couple weeks before the burning to Portland and Seattle on tour with great weather for MEDIA.  A well-received reading for a student poetry group at Reed College, organized by Allen Isaacson (thanks, Allen!) sparked the NW tour for Jane Ormerod and I with a fine chime.  Second night a fun time reading with compañeros Brad Garber, Gina Williams, Harlan J. Wheeler Jr, and Christopher Luna, followed by musical phenomenon The Famous Haydell Sisters, at one of the oddest venues I’ve read at yet, the generic-sounding Corner Bar, which turned out to be a purveyor of fine OTB betting machines.  Seriously!  And that, L’s and G’s and In-betwee’s, turns out to be my 400th featured reading to date.  (Yes, I get to boast occasionally.)  Does it bode well or weirdly?  I don’t know!  But the best thing about Portland was getting to spend some long-due time with fabulosa Mae Saslaw, who sheltered my creaky body in her swell new bungalow and spent a whole day with me tooling about in the occasional rain.  After leisurely coffee and convers with Mae and partner Mitchel Knight, and leisurely break-fast at the awesome Cup & Saucer Café in Kenton (everyone run, now run there and ruin it!), we dropped Mitchel off at his baristeria, swung by City Farm for some hay (got hay with Mae! hooray! hooray!), then took a very leisurely drive out to Sauvie Island for a long cool walk on the partly cloudy beach.  How more leisurely can you get?  Still savor that day, and the hay, and the Mae.  Then whipped up to nice ol’ Arctic Seattle for a final read and a few extra days and an Alaskan weather system that had it below freezing every night.  Woo-hoo!  Excellent read at Vermillion Gallery with Alex Bleecker, Thomas Hanchett, Mercedes Lawry, and John J. Trause, followed by a few days digging myself out of a workalanche in my thankfully comfy hotel.  Didn’t get to see as much of the frosty town as I’d have liked, but did get to spend some super-shiny time with old friends and colludistas Lily So and Lauren Holloway, and Lauren’s excellent new mate, Vincent Renart.  Beyond that had a great wrist-wracking night of pinball (Bay Area you suck!), an essential return visit to In the Bowl, a stunning cocoanut crème at Pie Bar, and quite a few hours of pleasant and delicious work time at Cafe Pettirosso, who tolerated me fairly well.  All in all a well-spent week, though I’m yet to get my hike on in either town, or outside of them, and I’m def headed for the hills on my next swing by.

Here I am eating life again and what am I gonna do.  The thing is, we leave this world, and what, the thing is, we leave, and the thing is we’re here, eating each other and bumping into solids and nerves.  We come out of holes and do things and stumble and groom and what’s the difference.  And skin, skin like sky.  What air we have, we soak and spree and move dirt around.  And why so blind?  Why so stumbly breaky eatey?  Use your hands, why doncha.  Use your eyes.  Use your twilight of the gods and have a nice meal.

REFLECT  ::  Awesome Thanksgiving this year at home – for all that holiday’s fucked up history, it somehow still works to celebrate bonds.  Guess we gotta do it sometime.  I usually check in with a selection of excellent cousins on that day, but for sev years I’ve wanted to cook up a meal for friends who don’t have cousins or family around, and who often don’t do anything while others sit around and feast, basically have an orphan’s Thanksgiving.  So I did, and what a fab nosh it was, with an apartment full of interesting, ardent, unusual, intelligent folks, namely Susan Pedrick (non-profit superhero and intense living creature), Bob Fischer (wild photographer and man of many colors), Garrett Murphy (poet, satirist, and cultural antenna), Jim Francis (adamant analyst of everything), and Alex K. Lee (biologist, humorist, and absolute podcast nerd).  Not a dull moment for hours, splendiferous victuals (including my first turkey and fresh cranberry sauce, traditional stuffing and a sweet vegan dressing, garlic-sesame brussel sprouts, Mom’s cole slaw [okay, I made it], luscious semi-sweet rosemary mashed potatoes by Alex, wowser spicy baba ghanoush by Bob, and the best deviled eggs and pecan pie ever made by Susan and I’m not kidding), great cheer all around, and a teensy but brightsy flare of hope for the species.  Thank choo-choo for that!  My only regret is that amidst all the glee I forgot to turn on the Netflix streaming Crackling Fireplace video; with a little luck it’ll still be burning next year.

The year peels open like a tomatillo, slowly, from the nub.  The sepals start out fresh and greenleafed, hiding the cold sour fruit.  But as the year matures and ripens, they dry to husk, and finally the five sharp leaves unfold like a star.  The fruit shines naked in its color – green, yellow, red, purple, a blend.  Which is it?  You should know, because you are that fruit, with all the year inside you.  It’s December.  Time to rip yourself open and drop those seeds. 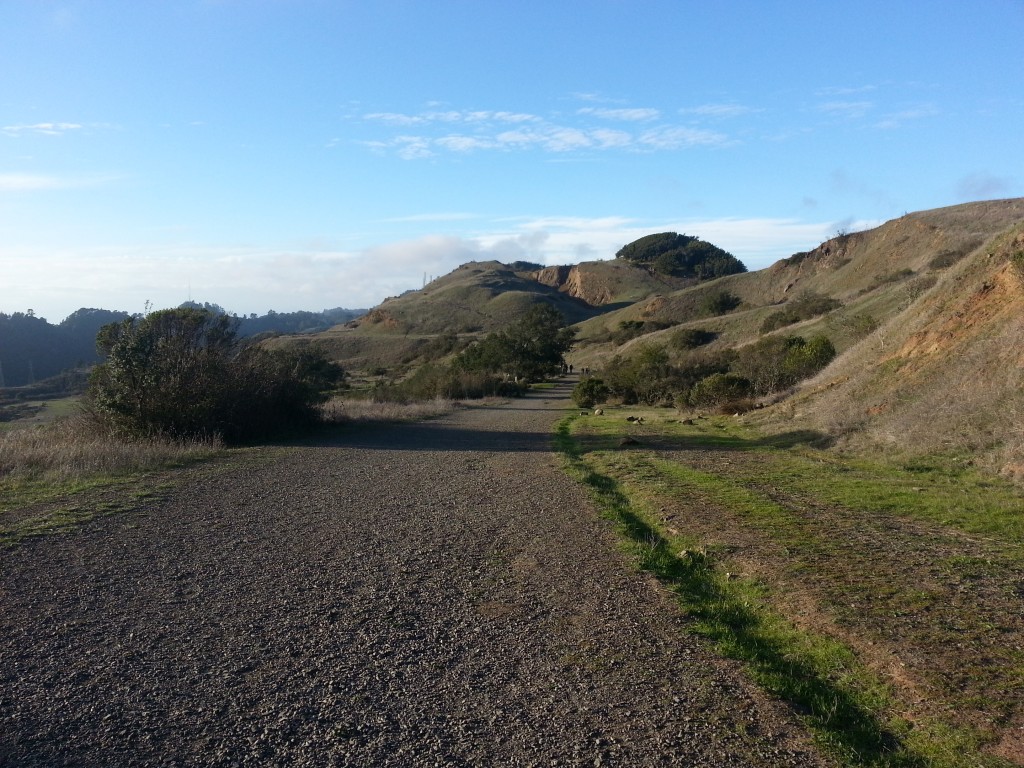