REFLECT  ::  I was talking with my friend Lonely Christopher the other day about what a rotten naughty shitstorm of a year this has been so far, what an uphill scram, and was practicing my usual delusional optimism, claiming deliriously that things have got to get better from here, that when you’ve licked the bottom of the barrel at least you’ve known the taste of bottom.  But then again I said that last month, just after the two deaths and the government-sponsored economic crash and just before the flood and the cancer scare and the ripped off toenail.  All of which pretty much makes WTF the word of the day.

At almost exactly midnight on the morning of April 1, my partner and I were hanging out in my apartment enjoying a movie and a great rainstorm when we heard the cutest little drip drip drip sound coming from the corner.  We both knew instantly what was happening:  the new owner was having the roof re-done (in March?!), the roofers had finished all but the front part of the building, and my apartment is on the top floor in the front of the building.  We subsequently spent all night frantically moving many dozens of objects from room to room, tarping floors and furniture with every piece of plastic sheeting we could find, setting out a zoo of random buckets and bowls, and channeling three rooms of multitudinous leaks of fetid brown water into makeshift reservoirs everywhere.  By morning and the eventual break of the storm, besides being painfully unslept I was now proud renter of a swamp of an apartment.  To his credit, the new owner took swift action, had my crappy carpets shop-vacced then steam-cleaned (they ended up looking nicer than ever), ceiling patched and painted, and sundry sodden items replaced within the week.  But that was still most of a week lost to sick and moldy mucking about, tripping over strewn things, and generally living in chaos.

Literally in the middle of that, three days post flood, I go to the podiatrist to check on a brown spot that’s been hanging out under my big toenail for a couple of months (yuck).  I’ve never had any parasites of the peds, and I assume he’ll give me some kind of fungal gunk or pill or something.  To my dismay from toe to top, he can’t identify damned spot, and is very concerned that it might be a melanoma, which he says have been showing up increasingly right there.  He says they’ll need to do a biopsy, but I’ll need to keep my foot up and wrapped for a few days.  Since I have to go home and sponge up moldy water from my closet, I defer and schedule it for next week.  Then I ask him how they treat a melanoma under the toenail, and he says, “We pretty much have to amputate.”  At which all my neurons blow a fuse.  I mean, it’s just a toe, even if it’s a big toe, but I like that toe, it’s my toe, and it’s really kind of pretty, and I tell him just that.  Of course he tells me not to worry (?!), and I go off to spend a week sleeping badly and saying goodbye to my toe.

Finally I go to get that anxious biopsy, which the doc had said would comprise punching a hole through the bottom of my toenail (ouch), but the biopsy doc says sorry, he’ll have to rip off the entire nail and then punch a hole in the (rather) tender flesh beneath (much bigger ouch).  So he does.  And a few days with my foot up turns into ten days without a shoe and a month of soaking a weird, gross wound.  And y’know, many people live with pain every day, much of it unnecessary, much of it worse than mine (blessings all!), but somehow that doesn’t mitigate the hundreds of pain days I’ve had in the last ten years of torn knee and tendons, GI bleeds, MRSA’s, teeth falling out, jawbone infections, and the thousand domino effects of having a human body in an age of virulent madness.

What is it they say about April?

Pain changes a man.  It’s the fundamental law.  Every government knows it, every slave.  It’s the spell that makes the bright hoops seem appealing; it’s the training that molds men to reptiles, revokes scant chance of human nature.  Yet it can also help to make us human, up to a point, revealing empathy to the self-absorbed.  As a social tool, however, it’s mostly used to crush the empathetic to a tired state of need, of frank and ethic-twisting survival.  Be it the bashing of the skull, brute negation, minimized education, undernourishment, or medication dangled out of reach, the effect is eventually the same, devolvement to a fetaled, ineffectual mass of organs staring at a screen.  The choiceless, perfect host for the parasites of greed.  Useful thing, pain.  Useful everyday thing.

ANNOUNCE ::  One reading this coming month, but more importantly a valuable event, that being a benefit for the space-bereft Adobe Bookshop, San Francisco’s vortex of light, which has been stripped of its twenty-four year home on 16th Street by the voracious demon of avarice that has consumed so much of this dear town.  Adobe does look to have found a soft spot on which to land, out on 24th Street, not out of the demon’s reach but at least a few feet from its current gullet.  But to make the leap they’ll need all the sprint they can get.  So this is one of numerous events concocted to facilitate Adobe’s rebirth.  It’ll be on Friday the 31st of May, with a rockin’ gang of poets (see the Events page for deets), all hosted by the fabulous Ingrid Keir, purveyor of fine euphonics.  Please drop by and support this marvel of a shop!

ANNOUNCE  ::  Also, I’m pleased and proud to announce that I’ll be co-hosting a NEW READING SERIES starting in June in Berkeley.  East Bay writers Clive Matson, Karla Brundage, and I are starting a new monthly venue that will feature three writers on the first Sunday of each month.  Our purpose, as is the case with other readings as well, is to bring together excellent wordsmiths that move in different circles, to spark cross-pollination and broader communities, to basically get everybody really turned on to each other.  We’re talking Summer of Love channeled into wordworld for cycles and circles and seasons.  The series is called Poetry Unbound, taken obviously from the Shelley poem but also from our hearts, and by Poetry we mean Making, we mean All Words That Are Made, and by Unbound we mean Open It Up and Let It Go.  So we’ll have poets and writers of all sorts, snuggling and flailing about in all kinds of couplings.  Woo-hoo!  We also want readers to be able to stretch out and really present their work, so each of the three will be given about twenty minutes.  We’ll start with a brief open mic (maybe 5 folks), and plan an intermission with music and games after the first feature.  Readings will be held from 5-8 or so at Harold Adler‘s fabulous venue the Art House Gallery on Shattuck, just north of Ashby (and a stone’s throw from the Ashby BART).  Our first reading on June 2 will feature East Bay scribes John Rowe, Ingrid Keir, and Tomas Moniz.  I’ll post information for the series on a new page, just under my Events page – you can find it here.  So come one, come all, come every vessel and come every stream – let’s set fire to the dream.

Holy shit, the comings and goings thrumming a liminal subroar of loving and crushing and bursting and raging and possibly staging the next revolution you know it will come though it may not appear in the manner that everyone wants.  We can’t expect comfort from a world made of needles but we can carry magnets to charter the natural law to a tremulous cataract charging the folk to a daunting foray into righteous amendment.  The rational mind has been absent too long from the social arena, and might need a tide of our psychic connection to scour the madness of politic.  Come sisters, come brothers, come all in between, and allow a moment of concord to deluge the scape for a new field, new planting, a fledgling compassion that might move us on.

BIDE  ::  I do not enter the month of May with any expectations, April taught me that at least, but I do begin with hope, as I so often do, or at least with sunshine and tea in a quiet yard.  I celebrate May the First, May Day, with Kayla Sussell, longtime Temescal resident, poet, editor, activist, and just plain marvelous human being, whom I am meeting for steeped leaves and warmth in her bower of a backyard.  We will breathe, we will talk, but most of all we will obstinately be.  We will bide.  Ya gotta go with your strengths.  All this just hours away, and I look forward to it as one would the most remedial of nectars, agua vita, respite endowed.

Early plum is bitter, early rose is tart, April light roves from sharp to glow as the month matures.  Fleeting rain pelts the windows, then lifts infused with jasmine and fresh grass.  Bougainvillea stuns.  Clouds break, and the softest breeze strokes the arms and face.  All the air sublime.  Sometimes we need profundity, and sometimes just a lavender day. 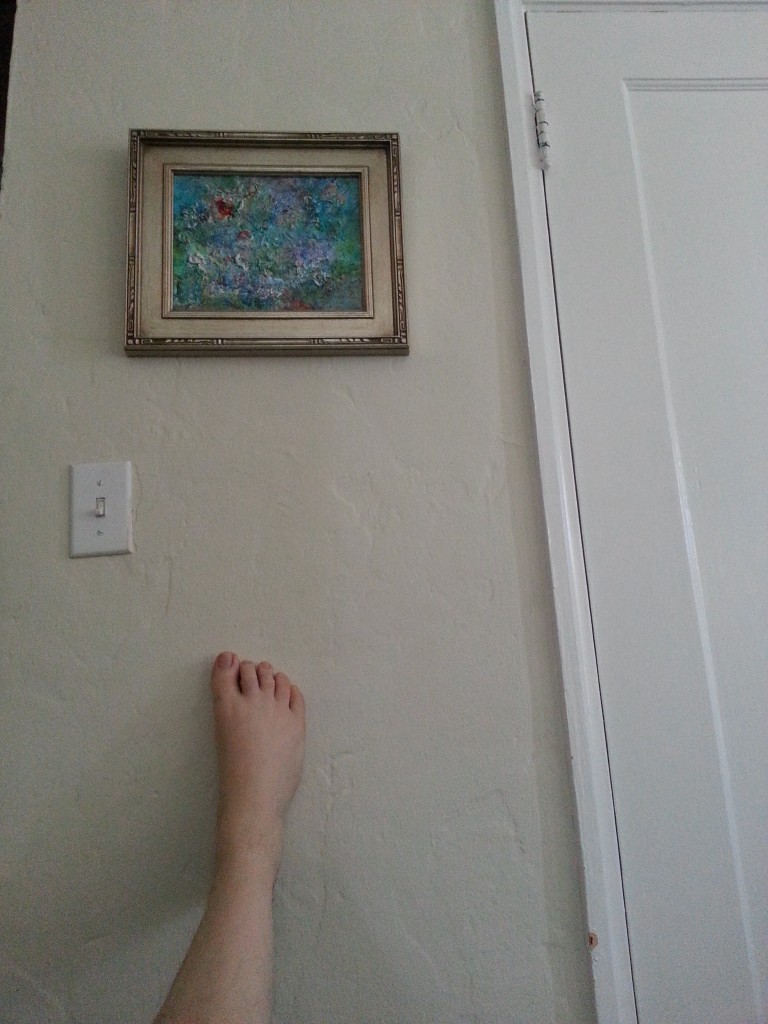