I scratch my head while trying to remember something. I wander aimlessly from room to room. I’m lost. I scratch my groin. How many more of us will it take before we recognize what’s really going on? I drink another glass of water. I’m parched. Will my throat ever feel right again? Will my skin? This flesh drifts and molts. I scratch my head again. I rub my neck and shut my eyes for a minute. I pinch between my eyes and take a long slow breath. I secrete something.

UPCOMING EVENTS  ::  The fifth installment of #we, my talk and reading series of queer perspectives, is coming up on Thursday, September 26 with a new date and a new location. With the closing of the Octopus Literary Salon, our ancestral home (of one year) (sigh), we’ve found a new home at Wolfman Books in downtown Oakland. This fall we’ll have two dates off of our normal schedule, which we hope to resume in 2020. To inaugurate our new home, we proudly present the riveting poet Dena Rod along with bisexual artist and activist Juba Kalamka, each of whom will delve into their lives to find, well, we. Please come by to help us warm the walls and hearts of Wolfman Books, and share in these human perspectives. Deets as always on the Events page.

REFLECT  ::  Octopus Day, the benefit that I organized on July 21 for the awesome Octopus Literary Salon, went splendidly. We ended up having exactly 100 performances by 86 wordsmiths and 14 music acts (ranging from solo piano/guitar/eclectica to full-on punk bands) over the course of 12 hours (10 am till 10 pm). The place was packed from 11 till close to 6, chilled out for a bit, then got re-packed by amped up music peops for the rockin’ final two hours. They brought in over $3800 in donations that day, which was a lot more than I was honestly hoping for, not including the rather larder-emptying food & drink sales. Huge creds to octopi Mike Linn for org’ing the musica, and Rebecca Grove for being a pillar of the world. Sadly that was not much more than a tear in the bucket, a tick on the flea of what they really needed, and the Octopus has been forced to close its doors on August 31. I wandered in for the last open mic on August 29, with some trepidation of tearing in the bucket, and ended up writing this:

Once upon a time or maybe a little over four years ago, an octopus was born in an unlikely bottle in the Uptown neighborhood of Oakland, California and has been winding its tentacles through the San Francisco Bay Area ever since. What did these tentacles do? They gave birth to flowers, and songs, and poems, and paintings and sculptures of octopuses. Ya gotta have a little vanity sometimes. Anyway this octopus grew and grew until it only pretended to fit into the little bottle it was born in. It was a nice bottle, comfy and warm (and sometimes very warm) with lots of books to read and people to talk to and stuff. Once the octopus couldn’t fit any more, the people still hung out, and it would peek its head in occasionally and sing them all a song. It would be an invisible song, and would make them dream of flowers and poems and square chocolate chip cookies. After a while, somebody stepped on the bottle and it got broke, but thankfully the people were home sleeping and nobody got hurt. Nothing got hurt and only one poem got broke. Then the octopus went and lived somewhere else. Where did the octopus live? Well, the octopus got bigger and bigger and bigger, so it lived EVERYWHERE. And where did the people go? The people went EVERYWHERE. And where did the flowers and songs and poems and paintings and sculptures all go? You tell me.

There’s a hair on your kitchen counter. What are you going to do with it? You could drop it in the trash. But is it really trash? You could stick it to your face. Will that make it part of you? You could eat it, though it might not particularly sustain you. Then again, what does. That hair, that simple hair, string of proteins and pigment, sharp and flexile, rides you into the next hour like a cougar on a stallion. Will you ever be rid of it? Will you ever be rid of anything?

I would like to introduce you to this enthralling book, which holds a cargo of thirty-three discrete yet interlinked poems to astounding effect. They catalog the great voyage of Magellan with hypnotic and immediate power that strikes the core of our lives again and again. Accompanied by gorgeous abstract photos, these unusual poems take you unawares by immersing you in a kaleidoscopic world that tries to meter its own chaos. Rather than leading you into them through a specific filter illustrated with catches of phrase, I’ll just set one down in toto for your immediate inspection.

The Burden of Water

Its sailors’ tears cannot exhaust salt water.
It does not wet the hands, this wailing water.

The foothold we expect to be there—isn’t.
We will be washed, then washed away by water.

My shoulders ache. My shattered knee gives way.
Strapped to my back is the wave that walks on water.

A thousand souls converted! As many dead!
Both bread and excrement dissolve in water.

Two volumes once sufficed: of Maps, of Scripture.
It tests the Word, this third—this Book of Water.

“The Captain’s pledged 100 ducats to
the first man who espies what isn’t water.”

What journey does not end where it began?
No raging thirst, no bracing myth of water.

You’d rule the rain, Magellan—yet dare not shed
these swollen squall-drenched robes, their weight of water.

One notices right away that the couplets each stand distinctly, while advancing the theme and sharing the final word, much like, as I’ve claimed, each poem is discrete yet interlinked – much like our experience of time. We notice beats of time in every aspect of this book, in the couplets, in the identical length of the poems, in the pentameter of each powerful line. We experience them and remember them as one might the moments of a voyage, as flashes, as waves lapping the side of a ship. Part of this turns on the brilliant choice of form: for those unfamiliar, the ghazal of Persian tradition. What I’ve noted above is of that form – the couplets (which vary in number in individual ghazals, though Hill employs nine per poem), the repeated final word – along with addressing the subject directly in the last couplet. Though many in the tradition are quite beautiful, I believe I can call their application here a-mazing, signaling repetition, repetition with variation, repetition like passing minutes, like hours, like days upon the open sea. These poems stretch time, make it feel overtly present yet ineffable, immeasurable, encompassing.

While the form suspends us in time, Hill’s extraordinarily specific language fills that time with relentless moments. Employing succinct phrasing along with some antiquated diction, he reaches past our quotidian word-sense to denser meaning. His sentences, and especially the couplets, are saturated with subtext, entendre, associations; these are, in one facet, as the title suggests, Magellan’s mind in conversation with itself. Like the associative mind, the couplets appear loosely but feel strongly connected. Thrown together we might find objects of trade

Your Book of Empire opens on command.
Fall face-first on the beachhead. —Read the sand! (Reverie 28)

Why do you wake again, Magellan, choking—
your arms, without you, rising to the surface? (Reverie 9)

to cultural observations, notes on seamanship, and any number of other ramblings. We leap from vignette to vignette, from image to image of wonder, of the body, of human striving and desperation, and of course of water, water everywhere. (I couldn’t resist.) Looming over all this leaping we come back again and again to the strict form, pentameter ghazals of nine couplets each, arranged in three parts of eleven each, almost as an explicit attempt to impose order on an unmapped sea, an unmapped mind.

So how does this book strike our core, as I suggested at the start? Because much of it is already there. Because it unveils a mind, the processes of mind, which we cannot help but recognize, replete with passion, denial, obsession, euphoria, terror…. This might make some readers uncomfortable, and will overjoy others (as it does me). More than that, it reveals in glimpses, almost in heartbeats, the core of one man’s life, full of hubris perhaps, moving forward. Sure, it’s a seafaring tale, for the whole collection is also one piece, one tale, and a well-researched one at that. (See the afterword for details.) But it’s also one of human striving, breath to breath, hour to hour, day to grueling day. It’s a record of memories, of how we remember, how we record. how we aspire to parse and order experience. More than anything, it’s an experience, not of your life perhaps, or mine, but of a full and ambitious life, told as the mind experiences pain and beauty, madness and quietude, all while staring mortality right in the eye. As extreme as some moments are, as unfamiliar as others, we find a great familiarity in these moments by their grounding in frank and stark human themes.

And it is in the end, from the start, a journey. How you choose to take that journey is up to you – whether one couplet per day, one ghazal, or the entire book in a briny draught. There are as many ways to read this book as there are readers. I for one would like to go back and reread it with the former approach, meditating on a single couplet daily through the course of 297 days. Now that might just feel like a 16th Century sea voyage. But should you prefer to take a deep dive in the brine, be warned: Here there be humans.

I sit, I stand, I climb the stairs, and mostly does my ass oblige. O meaty pump, O end of earth, you spring me to my next occasional flight, and yet you bore the death of me to ribbons. How many chairs, how many steps, how many humps upon the sunken mattress have you countenanced, have you reaped? And how still the fading victory? I cannot bear the endless time it takes to reach my floor; I cannot take the throne without that dread of void. For nothing, nothing does my ass reflex, except a little movement forward or a momentary pause. I spend my breath, I spend and spend for what? Another chicken sandwich? Another piece of mail? O ass, suspend my duty, let me ride another day, for now I flex you into air, and stay. 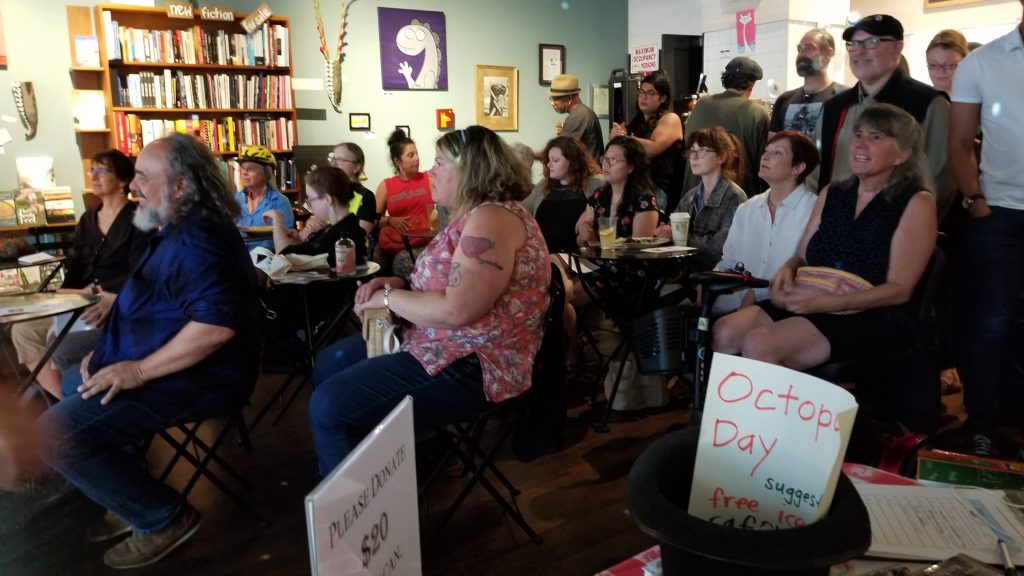